One of the best uses of numerology is to use it to spot one's own cognitive biases. Recommended Reading.

One of the best uses of numerology is to use it to spot one's own cognitive biases.

Lately I've been recommending this book to numerologists because it covers all the naturally driven biases that people are prone to when they attempt a naive exploration of numerology. 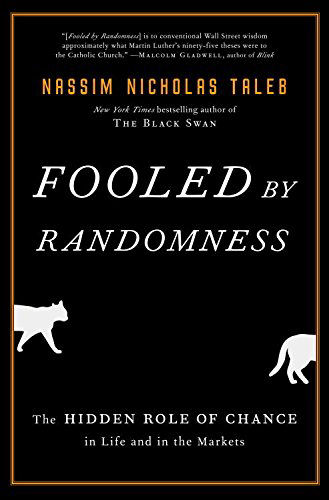 Let's start off on the right foot. I'm not against numerology per se. I just think that it can't be used to predict anything or to win at the market (except as an entirely arbitrary method of getting into a trade). I also think that it can't be used to advertise an event because it has no structure beyond an entirely subjective interpretation made only in the mind of the individual.
Random events cannot be engineered to conform to a numerological pattern, and these “patterns” that you think you're seeing are all in your brain.
Taleb tells us that things always look less random and coincidental when looked upon in hindsight, and he explains that we are designed by mother nature to fool ourselves. He gives us examples of probability biases inbuilt into our psychology.

I also recommend this book to people learning gematria, because I think it's important to keep these factors in mind as you practice gematria. If you do, then you'll be in the right state of mind to set to your studies of gematria. There has to be a healthy dollop of skepticism in your make-up to do gematria well. Taleb leads us through the effects of our under-estimation of luck and chance verses skill when it comes to attributing success.

Yesterday, I jokingly asked in the group "Did J.R.R. Tolkien do gematria?" By coincidence, after reading the "Latest Gematria" page, I saw that someone had entered in "Nine Rings of the mortal men." I was amused, and typed in "T + rings + mortal + men" and it came to the total of 777. But it was only a coincidence, and it was in error besides. The line from the poem is "Nine for the Mortal Men doomed to die" which is a different (non)sum entirely. Even had the line been right, Gematria does not tend to come in isolated lines but as groups of numerical calculations that can span several verses, and even chapters.

Every line of the first two chapters of Genesis is densely packed with gematria that is composed in an alphabetic order, and in cases like that we can have a very high confidence that the gematria of the bible is not a coincidence. Another matter that influences our confidence in the gematria of Genesis 1-2, is that it is a formal system of early mathematics, and like mathematics today it was practiced according to set rules and conventions of practice. It is text based, and thus tangible. However Numerologists/Conspiracy Theorists ('Numcon' for short) cherry-pick words, phrases or dates as evidence that these events were numerically determined by [*insert bad guys here*].

Critics dismiss such synchronicities as coincidence for a number of reasons:

1. People are programmed to recognize patterns. While this helps people learn to read, count, and recognize faces, it can also encourage people to interpret random events as patterns.

3. Some practitioners say they see certain numbers everywhere, and that this confirms that numerology is real. However, the frequent appearance is coincidental and people are likely to remember seeing certain numbers and forget seeing other numbers. This is called confirmation bias.

The Numcon people tend to use ciphers that have a low-value spread. In the Bible, there is also a basic cipher (the Genesis Order) which has a low value spread from 1-20, but the key thing to recognize about this is that the ancients recognized that this cipher could not be used by itself because the use of it would produce too many coincidences. That made it useless as a general cipher in isolation, so it was only used in combination with other scribal techniques such as the alphabetic acrostics. By contrast, the practices of Numcon don't use a gematria system or employ any scribal techniques. Their practice has no structure to it; consisting of simply making mental associations with cherry-picked words and phrases.

Some people argue that numerology can be used to predict the markets, but people do not get rich by using numerology in the Forex market. People can become successful traders by following a set of rules, and by letting their winners run, and cutting their losses quickly. If they deliberately limit their losses, then this is a proven strategy used by many Forex Traders today that delivers a long term chance of staying in the profession without losing your shirt and blowing up. Nassim clearly understands the principles behind being and staying a successful trader but with a little imagination many of his observations can apply to other fields too. The difference between the gematraist and the numerologist is that the latter is happy to be fooled by randomness, while the former is not.

Biblical Gematria is not just a difference in cipher - it is structurally different. It is a formal system of early mathematics that knew rules and conventions in its practice. This ensured that anyone similarly trained in the art was able to read the exact calculations written down by the scribe, as long as they were using the right cipher.

By contrast, the practices of Numcon don't use a gematria system or employ any scribal techniques. Their practice has no structure to it; consisting of simply making mental associations with cherry-picked words and phrases. This is why it can't be classified as "gematria' but only numerology. Numcon can mislabel their numerology as "gematria" but that doesn't make it true. You can call a square 'a circle', but that will not make it a circle.

Whether you're practising gematria or numerology, "Fooled by Randomness" should be a well read part of your library. You can find it on Amazon. Personally, I loved the audiobook.

On Getting a Bullshit Meter, Or, If I Remember Lemuria, Will You Pay Me $100 a Year? by Erica Cornelius.

Virtues and Vices of the Sephiroth, by Tom Schuler.

— JRR Tolkien, The Lord of the Rings.